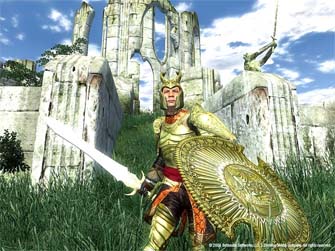 Here are the next couple of great PS3 games for the year.

The Elder Scrolls IV: Oblivion
This game got an almost perfect score from Gamespot – a 9.5! I am sure you know that this game made it big on the PC and the Xbox 360 before it came to the PS3 but it seems to be just as good – maybe even better because of the platform. Gamespot says:

• A massive and gorgeous world to explore
• an engaging story and dozens of hours’ worth of intriguing and exciting side quests
• core role-playing mechanics like combat and magic are as adaptable as they are enjoyable
• excellent music and hours of good voice acting.

The only negative point to it is that there are slight performance issues – but don’t they all have that?

What does Gamespot have to say? They gave it a 9 and following points:

• The Half-Life 2 saga represents some of the greatest shooter gameplay ever made
• Portal is a brilliant and humorous puzzle game
• Outstanding visual and audio design
• An unprecedented value.

Again, the downside has to do with slight performance issues. For 5 games in one, I’d say it is a very good deal.