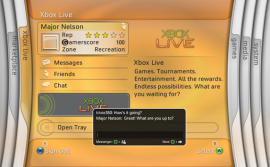 Just a couple more days and owners of the Xbox 360 will be able to download the latest dashboard update from Microsoft. Rumors about this latest update have been circulating in the past month and it seems that, finally, there is something solid to wait for.

So what else can you expect from this update? According to CNET, here are a few:

• Xbox LIVE Arcade hits: Best-selling Xbox LIVE Arcade games like Marble Blast Ultra and Lumines LIVE will be available at permanently discounted prices.
• New video features: Support for full-screen video previews and, more importantly, support for the DivX video codec (version 5.0 and higher).
• Inside Xbox: A direct newsfeed from Microsoft outlining up-to-the-minute information regarding Xbox LIVE and the Marketplace.
• Enhanced parental controls: New features include a timer that can limit the amount of time a child can play per day or week.
• Enhanced online profile: Allows members to add more information about themselves and limit who can see it on Xbox LIVE.
• Enchanced friends list access: Gamers can now see the friends list of other members of Xbox LIVE.
• Improved navigation: Game Store and Video Store buttons will be added to the interface, further simplifying navigation.