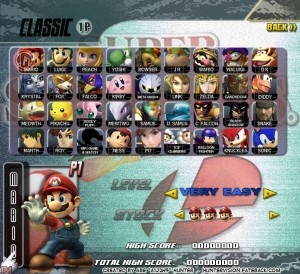 Wii enthusiasts, here is something for you. The hit series Super Smash Bros Brawl is coming to the Wii! It is one of the world’s most popular franchises due to the simple fact that characters from the whole Nintendo world are incorporated into the game. Imagine playing Sonic and Pikachu against each other. Or maybe Zelda and Mario.

Yahoo gives us all the reasons anyone would want this game for himself:

1. Actually, there are over 40 reasons you want it
Link. Zelda. Snake. Mario. Samus. Sonic. Pikachu. Bowser. Kirby. Peach. Wario. Smash Bros. Brawl features a huge list of characters from classic Nintendo games — and for the first time, favorites from non-Nintendo hits like Sonic the Hedgehog and Metal Gear join the party. Each comes with special attacks, props, sound effects and signature moves. Snake has even brought along his all-important cardboard box: no Special Forces agent leaves home without it.

2. Smash yourself
Smash Bros. games usually opt for multiplayer madness over single-player content. Not so with Brawl, which includes a solo Adventure Mode called “Subspace Emissary.” Written by a designer culled from the Final Fantasy games, it’s the perfect way to hone your skills before humiliating your friends, and if you get too lonely, you can even team up with a friend to take on the evil Subspace Army cooperatively.

3. Play with the world
That’s not to say that Brawl doesn’t have plenty of multiplayer content. In fact, it has more than any other Super Smash Bros. game to date. Not only can you enjoy four-player matches on one console you can also use the Wii’s wireless networking to take on players from your Wii friends list or the world at large. You can even capture replay footage of your victories and mail it to your rivals in the ultimate of trash-talking hijinks.

Oh, there’s more – just visit Yahoo’s feature on this and read to your heart’s content. After that, order your own copy.