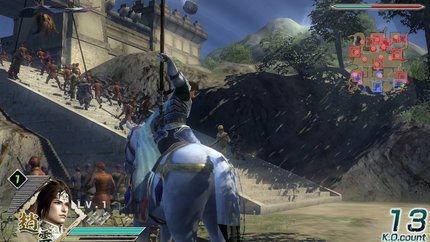 As you’ve probably surmised, I have been shopping this weekend. Together with the copy of Skate, which I reviewed in the previous post, I also got a copy of Dynasty Warriors 6 for PS3 – a game which I have been waiting for for quite some time now. It came out a month ago but I have not been able to get it till this weekend. So what’s the dish?

The graphics are awesome – but I already expected that. The attention to detail and the effects will just blow your mind as you play the game! My problem is that my TV does not seem to be good enough for my PS3 games!!! I have a pretty nice Sony TV which performs very well for most anything but when it comes to PS3 games, it just doesn’t have enough resolution. For Dynasty Warriors, especially, I can barely see the map and it makes for harder gameplay.

What happens is that I usually end up just running around not knowing where I am and where I am supposed to go. I didn’t realize the importance of the map until now. It still is fun just going around whacking crowds of enemy soldiers but when I lose the level because I do not know my whereabouts and where to go, it really irks me. Maybe it’s time to get a new TV? A 1080p one, perhaps? 😉

Anyhow, there are some changes – naturally – with Dynasty Warriors 6 like during the preparation you can choose a weapon but you don’t have your choice of officers – maybe it’s just like that in the beginning. I haven’t really made much headway because of the TV issue. In any case, it still is a game worth buying for yourself.