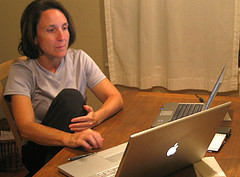 In the last post, we saw the definition of casual games as given by Wikipedia. If you noticed, I mentioned looking more into the line that said that older women tend to play casual games more than any other group of people. Is there any truth to this? I did two things to determine for myself whether the statement is accurate or not.

First, I looked around the web to find out what other people thought of casual gaming and whether or not the main players are really “older women.” What did I find? According to the charts presented at an SXSW presentation (courtesy of Joystiq):

Female gamers spend an average of 70% of their gaming time on computers, versus male gamers’ 56%. Female gamers make up 62% of the casual game audience, and this group, especially those age 13-17, play more sessions per month.

Ok, I can’t argue with numbers. The question is, just how accurate are those numbers? The second I did was to conduct my own little survey. I asked around – who plays casual games? What I found out is that indeed, a lot of women (age does not matter) play casual games. However, this does not mean that men do not like them just as much. I have a friend who is a PS3 fanboy but waits on the newest casual games as well. Another thing is that office workers seem to fall for casual games more – they tend to play while at work! (No passing of judgment here.)

So, who plays casual games? Just about everyone I know who likes video games. So let’s do away with the stereotypes, shall we?