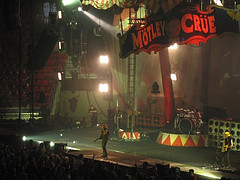 I never thought I would see this day – I was wrong. It seems that video games are becoming that prevalent that real life rock bands are seeing them as a good venue for releasing their singles. Well, at least one specific video game – Rock Band. I remember way back in the day when radio was the main means of releasing songs. Not anymore!

In an unprecedented move, rock icon Motley Crue is set to release their newest single “Saints of Los Angeles” through the video game Rock Band. This single is available for download through Xbox Live or the PlayStation Store. Of course, it isn’t for free, but the price is quite reasonable at 99 cents.

Motley Crue is not the only band that is going down this path. Def Leppard, another 80s favorite, is set to release their new single entitled “Nine Lives.” The band, however, chose another video game for their venue. Guitar Hero III enthusiasts will be able to download this latest single from Xbox Live on April 24 and from the PlayStation Store on May 8.

But wait – there’s more! There are rumors going around that Metallica has something in the works for Rock Band as well. Though nothing has been substantiated as of yet, it seems that the band just might release their new single through Rock Band as well.

I don’t know about you, but I think that this is quite revolutionary and presents a lot of exciting possibilities for musicians and their fans.