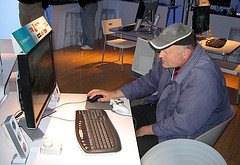 We all know that casual games are not in anyway losing momentum with gamers. From age 5 (I have even heard of 3 year olds playing casual games!) to 65, casual games have become a hit and will continue to do so in the future. This kind of gaming is definitely strong in the market today. Yet with the connections that the casual gaming sector are making with the social networking sites, they are set to experience more success.

By playing nice with social networks such as Facebook, expected to hit 100 million users by year’s end, the casual game category can only increase the stakes, says CGA President Jessica Tams. “The introduction of platforms which create opportunities for accessible and family play have raised the awareness of the fact that games are played by everyone, everywhere,” she says.
In the past two months, two new online gaming hubs, Cafe.com and Mytopia, have launched with features that let players connect with friends on the Web and through various social networks such as Facebook and MySpace, as well as Bebo and Hi5.

Ahh, I could name more than a few friends who would be happy to know that more casual games would be available on Facebook!