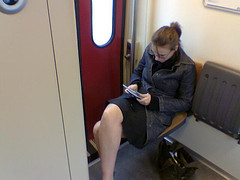 We have to admit, stereotype dictates that gamers are mainly male. As with most stereotypes, however, it is not really an accurate depiction. Ask the people in Australia – it seems that the number of girls playing video games is on the rise out there. I don’t really need a formal report to believe this – I have always been a firm disbeliever of that stereotype – but for those who want hard proof, check out the article which was recently published on Digital Life.

The average gamer in Australia is now 28 years old, up from 24 just two years ago. And despite being largely ignored by the game industry, 41% are female.

Women and older Australians are the fastest-growing audience for computer and video games and if trends continue, by 2014 the average age of Australian gamers will be the same as non-players – 42 – with an equal number of male and female players.

Trends are similar in the US, where 38% of gamers are female, spending an average 7.4 hours a week playing, according to the Entertainment Software Association.

Do you need more proof? I surely do not. This comes as no surprise, really. If you take into account casual gaming and other types of video games, you would see that many of them are targeted towards the female population. And even those games that are not really for females (from whose perspective, I don’t know) attract them. From the sports video games to GTA IV – I know quite a large number of females who love playing these games.