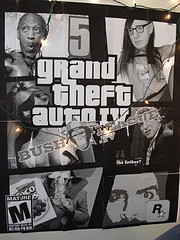 It’s been out for a week now and what are people saying about the latest installment in the GTA series? I seriously have not heard anything bad. Well, there is the fact that the game freezes for some PS3 units and for the Xbox but Rockstar was able to release a patch within days of the first reports. It hasn’t happened to me yet – and I am crossing my fingers that it never will, but in case it does, I am glad that the patch is available.

As for the game play – I have nothing to complain about really, at least for now. It is everything that I have been expecting. I think I am about at 20 something per cent of the game and I have been having all sorts of fun. No doubt that it is quite harder than the old GTA installments. Driving a car or a bike is not that easy – controlling that helicopter with the movements of the controller is worse – but it is all part of the challenge!

No more to say about that for now – GTA IV rocks!

Something on the lighter side – have you read Jeremy’s post on how his wife ruined GTA? It is quite hilarious, really. He writes about his wife tried her hand at it and obeyed ALL the laws! You should read it for yourself.