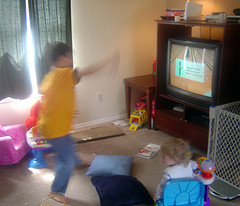 Aha! Now wouldn’t kids love to read that headline! I know that we have heard about the benefits that video games can bring to our kids but of course, many parents and even educators have had their own share of doubts. This is even truer when it comes to video games that have, let us say, controversial content. But let’s not focus solely on the controversial. That does not always result in productive discussion.

Anyhow, a group of researchers from the University of Central Florida conducted a study on educational video games and their effects, specifically, on the math scores of the subjects. Take note that the video games used in the study are labeled educational.

So what did they find out? Students who played the game (DimensionM – pity I have not even heard of this game) over a period of 18 weeks showed considerable improvement in their math scores as compared to those students who did not play the game. The report from the Orlando Business Journal notes:

The results support previous studies which have found that interactive games are more effective on cognitive gains than traditional classroom instruction alone, says Ntiedo Etuk, CEO and co-founder of Tabula Digita, an educational video game company whose DimensionM game series was used in the study.

Again, I think it does not take a rocket scientist to figure this out BUT having solid scientific proof is always a good thing, isn’t it?