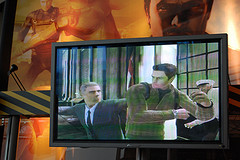 I have to say this – Robert Ludlum’s Bourne Trilogy is way up there on the list of my favorite reads. (Yeah, I like reading.) When they came out with the movie, I was quite skeptical. You know how those movies based on books usually end up butchering the original work. I was not far from wrong but then they didn’t turn out too bad either. I still prefer the books.

Then came the video game based on the movies. Apprehension made itself felt once again. We all know how disappointing a lot of video games based on movies are. I don’t even want to get started on this. Still, I downloaded the demo from the PlayStation Store.

Lo and behold, was I in for a surprise! The game was actually fun and challenging – at least the demo. It took me several tries before I was able to complete the first mission. The game play is seen from a third person perspective and the graphics are impressive. What I particularly like about the game are the moves that you can do as Jason Bourne.

The downside? Well, it is not really a downside but I do not think that this game is for kids at all. My little cousins – aged 8 and 12 – tried playing the demo but got tired real quickly because they found it too difficult. It is just perfect for older teens and adults, though.