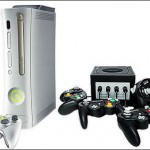 Well, I couldn’t be more wrong – at least when it comes to the situation in the United Kingdom. The Telegraph reports:

Video games are experiencing a surge in popularity as families affected by the credit crunch shun
expensive trips to the cinema and restaurants in favour of staying in.

New figures show that the video industry is defying the economic downturn thanks to a host of best-selling titles, including Grand Theft Auto IV, the Wii Fit, Mario Kart and Metal Gear Solid IV.

Game Group, the video games specialist, reported that pre-tax profits for the six months to July 31 would be at least £33 million – 32 per cent ahead of the City’s most optimistic forecasts.

Now that makes sense, doesn’t it? I do not know much about the prices of movies over there but I am sure they are considerable as well. If you have 5 members in the family, movie ticket prices would be a lot to handle. Add to that the gas that you have to spend going to the movies and then the popcorn and then eating out. It is but understandable that families would just choose to stay home and have a good time in front of their favorite video game console. I wouldn’t be surprised to hear the same trend in the United States pretty soon.