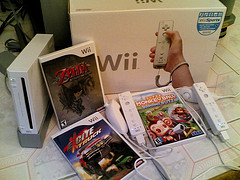 It is just the middle of the year but it may be the time to get your presents already. That is, if you are planning on getting a Wii or two for your kids (or yourself!). Forbes recently published an article on the possible – no, probable, shortage of the Wii come the Christmas season:

Although it has been nearly two years since Nintendo’s latest videogame system went on sale, finding one is still a challenge for U.S. consumers. The hunt may get a little easier in the months to come, but bagging a new Wii is still far from a sure thing.

“We are really intending to increase the shipments to the U.S., especially compared to last year,” says Satoru Iwata, Nintendo’s global president and CEO. “However, I can’t give you a 100% commitment [that you’ll be able to find a Wii this holiday season]. What I can commit myself to is that Nintendo is going to do its best to supply as many Wii hardware units as possible in order to meet demand there.”

Iwata says demand for the device in the U.S. is unusually high in contrast to either Europe or Asia. The company is on schedule to produce 2.4 million Wiis this year and will allocate additional units to U.S. retailers. Still, it has been caught off guard by the popularity of the Wii in America.
“We could not imagine it would be that high,” he says.

I understand how much in demand the Wii can be but what I really do not get is why the manufacturers just don’t make more of the consoles! They have been experiencing shortages for the past year and I am sure that they can somehow predict how many consoles they will be selling for the year. Why can’t make things easy and produce ENOUGH to meet the demand?