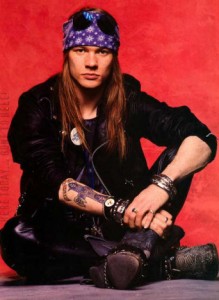 Whoever said they were, anyway? 😉 Obviously, I am a BIG Guns N’ Roses fan and though Axl Rose may not be the man he was decades ago, the band still lives on in the hearts of the innumerable fans from the 80s and 90s. For those like me, it would be more than interesting to see what they have in store for us as they partner up with the popular video game franchise, Rock Band.

According to various news sources around the web, Guns N’ Roses are set to release a new song this September. Following the footsteps of Motley Crue, Metallica, and other icons in the rock music scene, Guns N’ Roses is releasing their single Shackler’s Revenge, which is part of an album that the band has been working on for many years now. This is indeed good news for their fans, especially those who happen to love playing Rock Band 2.

From the perspective of a video gamer, this is merely something that highlights the influence of the video game industry. It used to be that radio was the main means of promoting a song. Now, video games are being used by major names in the music industry.

I like this excerpt from The New York Times:

Perhaps more important, Rock Band is introducing young listeners to older bands they might not know. Mr. Kovac said that Mötley Crüe’s exposure in the game helped it sell more albums because gamers spend significant time with the band’s music. “I credit Rock Band for bringing in the younger audience,” Mr. Kovac said. “The people who downloaded that song aren’t just listening to it, they’re interacting with it.”

Indeed, those who may have missed out on these great bands have this chance to experience great music.