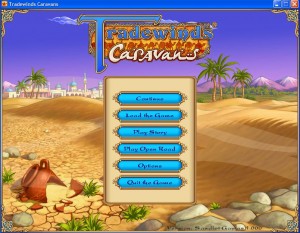 If you like casual games, then I am sure that you have played at least one of the installments in this casual game series. In some respects, Tradewinds Caravans is much like its predecessors. Still, it has some new additions to the gameplay which makes it quite engaging.

The basic idea is the same. You play a character, which you can choose at the beginning of the game. Using this character, you wander around the Silk Road trying to make money trading goods while trying to stay alive battling the numerous bandits that ply the road. Of course, you still have to accept and complete tasks. One of the main things I like about this game is the dialogue. You have numerous dialogues with other characters in the game and they are simply witty. I think this is a trademark of the series. Even the old Tradewinds were known for their humorous lines.

A new aspect to Tradewinds Caravans is how you conduct the battles. You can now hire various guards and mercenaries to keep you safe but they will not add to your goods capacity. For that, you have to buy pack animals at the stable. I think this aspect has made the game a bit more difficult than its predecessors.

I have finished the game and I have unlocked 2 special characters. I will not be a party pooper and tell you about these 2 characters. Why not try out the game for yourself and experience it for yourself?