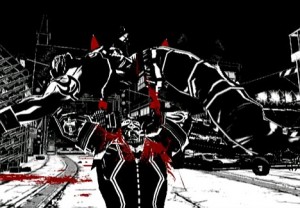 The Wii has always had this image of being family friendly. People get together for good clean fun without the worry of having too much violence, blood, gore, sex, and what have you. Come to think of it, you always hear about people going haywire about games on the PlayStation (2 or 3, it is the same) and the Xbox 360 (and the old Xbox) but you do not hear people creating such a huge fuss about Wii games. How can you? With games such as Wii Sports and Cooking Mama, you simply cannot find anything to complain about!

Then again, change is the only constant thing in this life. And apparently, Nintendo is not immune to changing. They are set to release what is being dubbed as the most violent game ever. Called MadWorld, the game is supposed to “revolved around the themes of brutality and exhilaration.”

The descriptions of the game that have been going around are really stirring things up. Parents and anti-violence groups are already making some noise about it. Some are saying that the game should not be released at all while others are just asking for a ban in their country.

I am not really that big on excessive and senseless violence in video games BUT this kind of reaction is not really logical in my mind. The only thing I can think of is that NO ONE is forced to buy any game. If a game is dubbed as violent then do not buy it! No one forces your children to play these games, right?