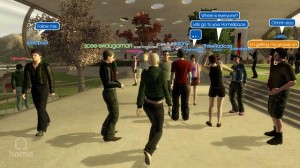 I love guarantees. At the same time I hate them. I love them when they are met all the time but I hate hearing guarantees when I know that the track record of the party giving the guarantee is far from unblemished in this regard. Now, I love Sony, you know I do BUT I am not sure about their guarantees. Remember the PlayStation3 and how long it took them to actually get it out in the market?

Anyway, for what it’s worth, Sony has guaranteed the release of the PlayStation Home this year. The guarantee was made at the Games Convention in Liepzig. If you are an avid Sony fan, you would know that they are sending out invites to beta testers for Home. (No, I haven’t got mine.) So anyhow, we have all been waiting for the release of Home for about 2 years now, I think. Sony has finally said something definitive. According to Martin Van Der Meulen, a producer for Home, it should out by the end of the year. More than that, he said that Home will be free – forever.

Now these are pretty big promises. I am not complaining. As I said, I love guarantees. I just really hope that Sony will live up to these promises and not announce another delay later on this year.

Another thing about Home – they are going to have spaces integrated specially for games. For example, there will be a space for Uncharted: Drake’s Fortune. It will be really interesting to see how this will work out.