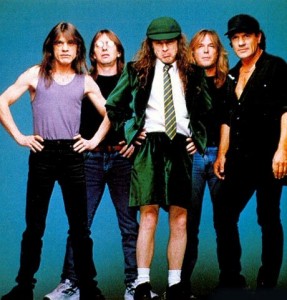 The video game industry has really expanded these days, hasn’t it? With the revolutionary ways video game developers have introduced to the general public, this is not a surprise, really. Toddlers and grandparents alike have learned to love video games because of the Wii. Music lovers and musician wannabes have found their dream in games such as Guitar Hero and Rock Band. Even real life musicians have found a novel way to gain publicity through the same games.

And this time, another rock group is given the chance to breathe new life into their career. With the latest version of Rock Band, AC/DC is set to gain more new exposure than they have in the recent years. Dubbed “AC/DC Live: Rock Band Track Pack,” the game promises a peek into real life sets of the band. This expansion pack – mind you, it is not a full game – can be used with both Rock Band and Rock Band 2.

“When MTV first launched in 1981, we promised that people would ‘never look at music the same way again’ and, with ‘Rock Band,’ we continue to fulfill this commitment,” Paul DeGooyer, MTV’s senior vice president of electronic games and music, said in a statement. “Being the first to present these revered songs in interactive form, exclusively on the ‘Rock Band’ platform is a true honor.” Among the songs included in the game are “Dirty Deeds Done Dirt Cheap,” “Moneytalks,” “You Shook Me All Night Long,” “For Those About to Rock” and “Highway To Hell.”

AC/DC fans who do not have Rock Band will probably find their way to the video stores soon.