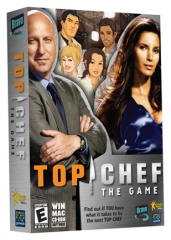 Cooking games have become popular in the past year but many of them tend to be similar to each other. I personally don’t mind this as long as the games are fun. A newcomer to the world of cooking games seems to be catching on like wildfire. I am sure that you know all about Top Chef, the reality TV show. Now there is a game version, which is touted by Gamezebo as one of the best cooking games:

In game, you play a young and naive chef named Anna. As you progress, you learn more about Anna and the other contestants – some friendly, some not – through short intro and outro cutscenes. Naturally, you have a rival, who’s named Charles. He is arrogant and condescending, and wouldn’t it feel great to knock him down a peg!

Hosts Padma Lakshmi and Tom Colicchio from the show are here. The graphics are cartoony, and all the characters are distinct and well-drawn. Even the food looks tasty! The music is taken from the TV show, adding to the authenticity.

The “meat” of Top Chef is your time in the kitchen. Anna has to create dishes in two Quickfire Challenges and one Elimination Challenge in each of the 15 episodes. Before each challenge, Padma briefs you on what you’re about to cook and what requirements you have to fulfill. Anna gives you some helpful tips, then it’s out of the frying pan and into the fire.

After Anna decides what dish she’ll prepare, like a canapé, grilled meat or sandwich, a recipe appears. But this is where Top Chef becomes wonderfully inventive. Rather than explicitly following a to-do list for a dish, you have to add the ingredients that you think are most appropriate.

For me, the “tasty-looking” food is very important. That is what actually entices me to play these cooking games. Of course, the fact that you can make up your mind as to which ingredients to use adds another realm to the game. Perhaps Top Chef will beat all those other games out there.