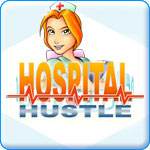 As promised, I did some research on what the hottest casual games are at the moment. I have my own favorites but of course, that does not mean that everyone else will like them. So I headed on over to Gamezebo, my favorite source of casual games. This is their current top ten list:

Let me see. I am currently playing Build-a lot- 3: Passport to Europe. It really isn’t that much different from the previous versions of the game, except for new places, new types of houses and buildings, and new services. They also added a bit more “trouble” for the player – fire and noisy party incidents. If you know someone who liked the first two games, then it would be a good idea to get the third.

Fitness Dash and Hospital Hustle are looking pretty good. I think they will suit people who liked Flo and her slew of Diner Dash games. I have also looked into Forgotten Lands: First Colony and it might be good for those who like “slow-paced building-worlds” games. The reviews of this last game generally bode well except for the graphics, which are reportedly unsatisfactory.

So there you have it – take your pick and make a casual gamer happy this Christmas!