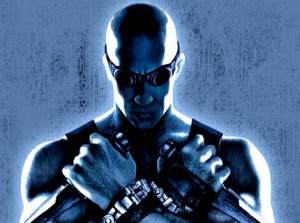 I ashamed to say that I never even heard about this game until today! I was just aimlessly surfing the web when I ran across a review over at The USA Today. Apparently, there is a new Riddick game! (Bashing myself now, me the self-proclaimed Riddick fan!)

So what does Chronicles of Riddick: Assault on Dark Athena have to offer? Is it any good? (I think anything that has Riddick in it will have its own merits.) Brett Molina offers these insights on the game:

Once again, Riddick finds himself in need of escape after the mercenary spaceship Dark Athena captures his vessel. While Chronicles of Riddick is often identified as a first-person shooter, the game feels more like first-person action, combining stealth combat and platforming along with the firepower.

Riddick’s eyes are his signature physical feature. His “eyeshine” — a surgical procedure — makes him sensitive to daylight, but allows him to see clearly in the dark.

He compares the game to others in the genre:

Compared to other first-person games, the presentation is average, particularly the visual details in characters. And while the story is pretty interesting, Riddick’s dialogue is absolutely cheesy, delivering bizarre lines such has “I’m either doing, or I’m not.”

Now how can they ruin Riddick like that? But to the developer’s credit, Molina says:

Fortunately, the campaign feels really well balanced between intense firefights against drones and giant mechs as well as platforming. The most satisfying moments are when Riddick lunges from the shadows to quietly take down unsuspecting foes.

So there we have it. While the game might not be a perfect tribute to the awesomeness of Riddick, it is still worth playing. Now I’m off to see where I can get a copy.