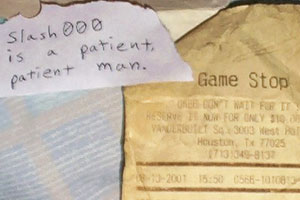 How long have you waited for a game to arrive since you preordered it? A month? Several months? A year? Truth be told, I hate preordering games. Perhaps I am an impatient person, more than most, but I would rather buy the game the moment it comes out. This way, I am not bound by expectations, which are most probably going to be unmet. Let’s face it, game developers have a way of not meeting first, or even second, deadlines.

The story of Slash000 is something else, however. Way back in 2001, he placed a preorder for the first-person shooter game Duke Nukem Forever. Back then, it was slated to be one of the biggest games in the history of video gaming. Slash000, self-proclaimed to be one of the most patient people in the world, placed his order while the game was still in development.

Eight years later, Slash000’s wait has come to an end, but not in the way he envisioned it. Last week, 3D Realms, the company behind the game folded. Yes, it ran out of money and has declared bankruptcy, bringing down with it the dreams of people like Slash000.

This is story is ridiculous at best. While Slash000 only paid $10 for his deposit, the mental and emotional stress that he has been put through is probably indescribable! I cannot imagine waiting for a game for more than a year, much less almost 10 years! Incompetence is the word that keeps running in my mind…the people at 3D Realms should never be allowed to work in the video game industry again. Ever.