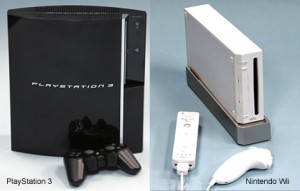 What made the Wii so popular? Before Nintendo came out with this gaming console, the “war” was practically between Sony’s PlayStation units and Microsoft’s Xbox units. Then the Wii came into the picture. Now, it is undoubtedly at the head of the race. So what made it so popular? There are probably a lot of answers to this question but the Wii-mote is definitely going to be one of the most common answers. To make the long story short, the Wii-mote has made revolutionary changes in the way we play games.

Now what would happen if the PlayStation or the Xbox had a controller much like the Wii-mote? Would it boost the sales of either gaming console? I cannot give a definitive answer BUT I am pretty sure that the people at Sony have thought about it. A lot.

In fact, the rumor is that they are releasing a PS3 controller which bears a striking resemblance to the Wii-mote, but with new developments. Yahoo Games has the story:

While Sony’s current Sixaxis PS3 controller already detects motion, its functionality is severely limited compared to the Nintendo Wii remote. According to the article, the new device will one-up the Wii controller by using tiny LED lights and a small webcam to track movement, which will apparently make for much more accurate motion-detection. This bears a striking similarity to a patent application filed by Sony in 2006, lending an air of credibility to the claim.

Can you imagine playing God of War 3 using this controller? Now all we need are 3D effects….