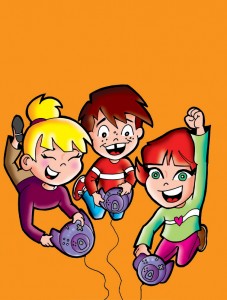 We have this propensity for naming generations according to a distinctive attribute. Remember the Baby Boomers? Generation X? How about this generation? Have they been labeled yet?

If you were to ask me, I would say Generation Video Games, or Gamers, or whatever sounds better. The reason for this is a study that was conducted by Pew Internet & American Life Project. This study highlighted the fact that nearly every kid – at least in the United States – plays video games.

To be honest, we could all have made that statement – probably almost every person we know plays video games. Then again, having a “scientific” study back up your idea is something else. So what did the study find out aside from that general fact?

Ninety-seven percent of young respondents play video games. That’s 99 percent of boys and 94 percent of girls, with little difference in the percentages among various racial and ethnic groups and incomes. In fact, 7 percent of those surveyed said they didn’t have a computer at home, but did have a game console, such as Sony Corp.’s PlayStation, Microsoft Corp.’s Xbox or Nintendo Co.’s Wii.

They play often. When surveyed, half of the respondents said they had played a video game the previous day.

Their games of choice are as diverse as their tastes in music or TV. Eighty percent of respondents play five or more different game genres, with racing, puzzles, sports and action the most common. Favorites were “Guitar Hero,” “Halo 3,” “Madden NFL,” solitaire and “Dance Dance Revolution.”
The last two points do not surprise me at all. The same thing would apply to adults I know. The first point, however, was a bit surprising. I thought that despite the popularity of video games, personal computers would still be present in homes. I guess I was wrong.

One question – would you want your child’s generation to be labeled based on video games?