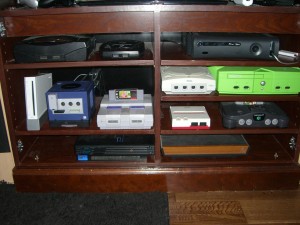 I just could not resist this. I might be biting off more than I can chew but after reading the entry titled “Would You Buy Your Kid a Video Game Console!?!” I knew I had to write my own thoughts. Here is what the blogger had to say:

I remember one time our neighbors were over and the topic of video games came up. They were unsure if they were going to treat their kids with a computer box of pointlessness. I immediately said “Don’t ever buy them or let them get a video game console”. WHY? Because after 14 years of playing video games I have learned NOTHING except for how to be a better video game player. If I could go back and erase any type of video game console from my life I honestly believe that I would become a smarter and more active person.

First it made me think. I have been playing video games for longer as this guy – on the PC and consoles combined. What have I learned? Faster and better reflexes? Interacting with other people? Strategy? Even simple math. Persistence perhaps.

I wouldn’t go as far as to say that I have learned NOTHING. Then again, he does have a point about being a more active person. I suppose it all boils down to how parents monitor and control the use of the video game consoles and computers. Just like anything else, moderation is the key.