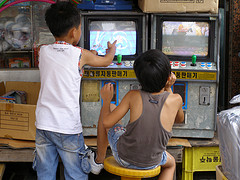 …and I’ll tell you who you are. Obviously, this is my own version of the cliché “tell me who your friends are and I’ll you who you are.” Though I believe that this cliché can be true to some extent, I am not quite sure that it applies to video games.

I am actually not the first person to think along these lines. In fact, I got the idea from Crispin Boyer who wrote an entry in his blog entitled “Do we play what we are?” He, in turn, got his inspiration from a series of essays “Are we what we play?”

It seems that more and more gamers are digging deeper into the psychology of gaming – and why not? Gaming holds more meaning than merely mashing buttons or clicking the mouse.

I suppose it is not as clear cut as that. I have a friend who has never tried skateboarding. Yet he is addicted to Skate. Then there is another friend who has never laid a hand on any other person and is opposed to violence in principle – yet he can’t get enough of God of War.

So what’s the deal? What do you think?