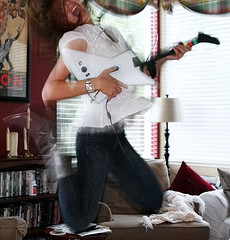 I have never played a video game while drunk – well, as far as I can remember. I ran across this funny post detailing the top 5 games you are better at when you’re drunk. I guess the effects of St. Patrick’s Day drinking had not worn off yet when Jenn Frank wrote this post. It’s an amusing read – here’s the list:

1. Phoenix Wright: Ace Attorney – DS
While you might not think booze and detective work go together (although, come to think of it, there is a certain Sam Spade appeal there), the truth is, point-and-click adventure puzzles seem to go down a little easier with a glass of wine.

2. WarioWare: Smooth Moves – Wii
With alcohol, it’s easy to coerce your friends into doing things they would never ordinarily do. Turn that negative into a positive! Nothing feels quite so right as finding four of the burliest, manliest dudes you can, moving the Hummel figurines out of arm’s reach, and bringing out the Wii Remotes.

3. Guitar Hero – PS2, 360, Wii, Mac
With “beatmatching” rhythm games and alcohol, there’s a dramatic bell curve. You’re invincible after a beer, but after one too many, you’re so kicked out of the band. The reason you can play games after a whiskey is actually the same reason you don’t drive after a whiskey: Slightly impaired judgment means you’re more confident, more daring.

4. Rez HD – 360
Perhaps games like Breakout benefit from alcohol consumption because they do rely on visual abstraction. Modern shoot-em-ups like Rez also seem to benefit from beer buzz: The half-awake, primal brain focuses on nothing in particular, and yet, as if automagically, you manage to rack up a phenomenal score.

5. Breakout – Atari 2600
Breakout is a very twitchy game that requires fine, precise movements and astute snap decision-making. In that regard it’s practically a sobriety test.

What do you think? Want to try one of these out after a night of drinking?