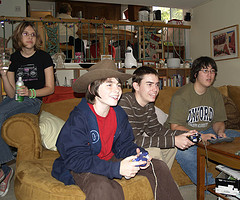 Another study gives much needed support to video games. According to Carmen Russoniello, a professor at East Carolina University, video games are potentially beneficial when it comes to relieving stress and tension. Here is more information from IT World Canada:

Carmen Russoniello, a professor at East Carolina University, recently finished a six-month study of people playing Bejeweled 2, Peggle and Bookworm adventures. The study concluded the games could have “potential therapeutic applications,” according to a press release issued by PopCap games, which by sheer coincidence happens to be the developer of these three games.

The school’s department of recreational and leisure studies observed the behaviour of video game players and measured their stress, psychological tension, anger, depression, vigour, fatigue and confusion. For example, people who played Peggle experienced a 66 per cent reduction in “psychological tension” while 43 per cent of those who played Bookworm Adventures experienced a reduction in depression. Rumour has it people who reached the fourth screen in Space Invaders also experienced confusion, though that game was not included in Russoniello’s study.

It is interesting to note, however, that only specific games were covered by the study. The GTA series, which could be the most popular game franchise ever, was not included in the study.

The East Carolina University study did not include Grand Theft Auto, a game where players can pretend to be criminals taking on rival gang members and robbing banks. The game’s developer, Rock Star North, also makes Bully and Manhunt.