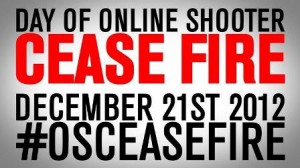 Pearman earlier created a nine-minute video to appeal to gamers especially online shooters to take a one-day break from their usual routine. He said his goal is to pay respect to the victims of the tragedy that occurred on December 14. The video has close to 11,000 views already and 300 comments.

Pearman made clear, however, that his call does not mean admission that violent video games had a role in the school shooting incident. He stressed the move is just a consolidated show of peace to the world and that he has a high respect for video game developers for all the hard work they do to come up with great games for both kids and adults. Pearman also clarified that his call had nothing to do with the December 21 supposedly doomsday.

But while the campaign gained support from many gamers, the others did not take part saying it has no purpose than to claim the violence caused by video games.

What about you? What did you think of the ceasefire?