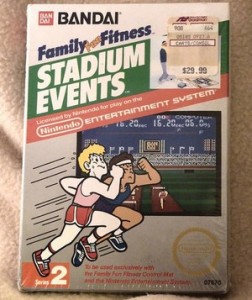 What is the most expensive video game ever sold? No, it’s not an Xbox 360 game. Neither is it a PlayStation 3 game. Up till last year, the record holder is a cartridge of Nintendo Game Challenge, which was sold for $21,100. Just the other day, though, someone sold a sealed copy – the only one thought to be in existence – of the NTSC version of Stadium Events.

Guess how much it went for? A whopping $41,300!!! Now why would anyone pay that much for a game that you probably won’t be able to play today? Zergwatch tells us more:

There is a new Holy Grail of Rare Video Games, and it is Stadium Events. The auction on a factory-sealed NTSC version closed just minutes ago , and it was sold for $41,300, almost double the old record. Three days into the bidding the high offer had already eclipsed the record price ever paid for a rare game – $20,100 for a Nintendo Campus Challenge cartridge sold last fall by Denver entrepreneur J.J. Hendricks , who earlier in 2009 also paid $17,500 for a gold Nintendo World Championships cart. “I was pretty amazed at the price,” Hendricks told Kotaku. “This Stadium Events auction destroys the previous record and I think is a surprise to everyone in game collecting community. I just wish there was such a thing as a sealed Nintendo World Championships Gold.” Hendricks said he did not bid on the sealed Stadium Events box. “I thought about it briefly but the bidding quickly went beyond what I was willing to pay,” he said. “I’m not that into sealed game collecting.” Bidding surged in the final 18 hours of the Stadium Events auction, nearly doubling the price from $22,500 to its final amount. Much of that was attributable to a single user bidding it up unopposed 35 times in a 10-minute span early this morning – from $22,700 to $39,800 – before leaving the auction. In all, more than 100 bids were placed on the item.

If you’re shaking your head and saying it’s crazy, I am with you! It is crazy. But hey, you can’t put a price on some things, can you?