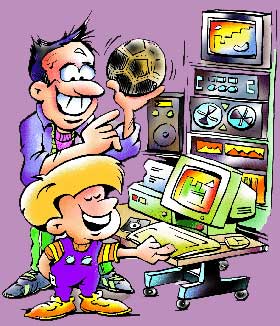 The more advanced a gaming package the higher the need for better hardware specifications. Such has been the method adopted by PC games, PlayStation and Xbox today. The sequels to game consoles have been done for the purpose of providing better quality game play and graphics above all. It is quite obvious that the higher fine graphic turnout has become the darling of most game enthusiasts today. While it is true that preference for overall game play is important for hardcore gamers today, these are sometimes overshadowed by high resolution graphics that people get people glued to the fine graphic representations used in most games like role playing and sports games today.

There have been a number of revisions on games today, a lot of where improvement in representation once the game console is in use can be significantly noticed. War games, sports and arcade games have been the sought after preferences in demands for gaming preference today.

Among the games notable for such innovations include that of Gears of War, Gran Turismo 4, NBA Live Series, and the Raw vs. Smackdown sequels. A lot of them are highly touted and rated based on actual gamers’ experience.

Some game critics would call it another combat game where the star of the whole story plot would have to defeat all enemies present to get to the boss and advance to next levels but Gears of War offers something more in this Xbox offering. Packaged with upbeat soundtracks and high quality sound effects, it is truly some that will entice trigger happy gamers to check out.

Marcus Fenix, the star of the game is a former soldier who was been locked up for being accused of being a traitor in the opening storyline. He is freed from lockup to help a team called the Delta Squad to fend off the impending threat being carried out by the villains branded as Locusts. Their mission is to find the Alpha Squad but to be able to do so; they must effectively get past the spread Locusts through the various acts and levels of the game.

Finding out the weak points and being alert from the hiding villains in the game is the main ploy. With beefed up soldiers, it would take some time before Fenix and his troops would be killed. Unless of course they are sitting ducks and not careful of his surroundings, the game is a test of awareness, alertness and pinpoint accuracy to rule the threat that the Locusts have carried out.