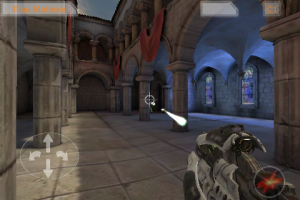 The demo is both playable and has a flythrough. It’s using a modified Unreal Tournament level previously shown off at GDC. A virtual thumbstick on the left side of the screen controls your movement, while tracking your thumb in the lower right corner of the screen controls the camera. Just tap the screen to shoot. Mark said this is a tech test bed and they’re experimenting with several different control schemes including ones with tilt.